U.S. Department for the Preservation of American Dignity

The U.S. Department for the Preservation of American Dignity or DPAD was an American government department created by President Lyndon B. Johnson during the 1960s in the event of an invasion. The department went defunct sometime in the mid-1970s.

Its goal was to preserve the memory of the United States by ordering citizens to kill themselves in the "victory position" if a foreign enemy had conquered the country.

This department was first featured in the episode Contingency in the Local 58 series. You can quickly see a glimpse of the logo before the contingency message in the episode plays. DPAD was in charge of airing the message shown that followed with the instruction of citizens to kill themselves (which was their main goal). The message later turned out to be false, though during the apology, the outline of a "fake hoax apology card" bearing the Department's logo can be seen. They have not been featured in any other episode of the series other than clip shows. 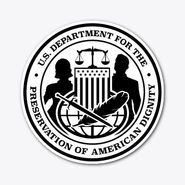 U.S. Department for the Preservation of American Dignity's black logo.
Community content is available under CC-BY-SA unless otherwise noted.
Advertisement